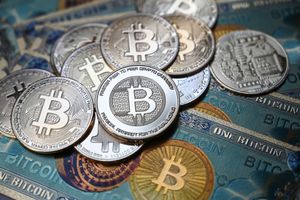 Bitcoin Is on a Bumpy Ride. Where the Latest Crypto Rally Could Top Out.

BitcoinBTCUSD +2.92% and other cryptocurrencies were on a bumpy ride Monday as volatile trading, driven by a mashup of factors, dragged digital assets in different directions. The price of Bitcoin rose 2% over the past 24 hours to $22,200, having swung multiple times in a range of nearly $1,000 during this period. The largest digital asset staged an impressive rally on Friday, popping up from around $19,000 to return to the $20,000 to $25,000 range in which the token has languished since a mid-June selloff knocked it down from $30,000. “Our short-term gauges have improved, supporting a greater oversold bounce,” said Katie Stockton, managing partner at technical research group Fairlead Strategies. “We do not advocate counter-trend positions in Bitcoin or other cryptocurrencies, at this time, but we would not be surprised to see the upper boundary of cloud-based resistance near $23,000 tested before the downtrend regains hold.” Bitcoin has rallied alongside stocks. The Dow Jones Industrial AverageDJIA +1.19% and S&P 500SPX +1.53% were on track to notch a fourth straight day of gains, having snapped a three-week losing streak following a rally before the weekend. While cryptos should theoretically trade independently of mainstream finance, they have shown to be largely correlated to other risk-sensitive assets, like stocks. Optimism that inflation is cooling, which could see central banks ease off from aggressively tightening financial conditions, has boosted sentiment. The Federal Reserve has delivered the biggest interest-rate hikes in decades in 2022, knocking risk assets and raising the prospect of recession. This narrative will be tested by inflation data when the U.S. consumer price index (CPI) for August is released on Tuesday. Also helping the largest digital currency has been a slide in the world’s largest fiat currency, which has strengthened this year and added pressure to Bitcoin. The U.S. Dollar Index, which measures the greenback against a basket of six peers, was down 1% Monday and has fallen almost 3% since notching new 20-year highs last week. “Bitcoin is welcoming the return of risk appetite and a falling U.S. dollar,” said Edward Moya, an analyst at broker Oanda. “The broad market rally has rejuvenated cryptos and that could continue if investors continue to look beyond hawkish central bank overtures and lingering recession risks.” Source: Barrons #Bitcoin