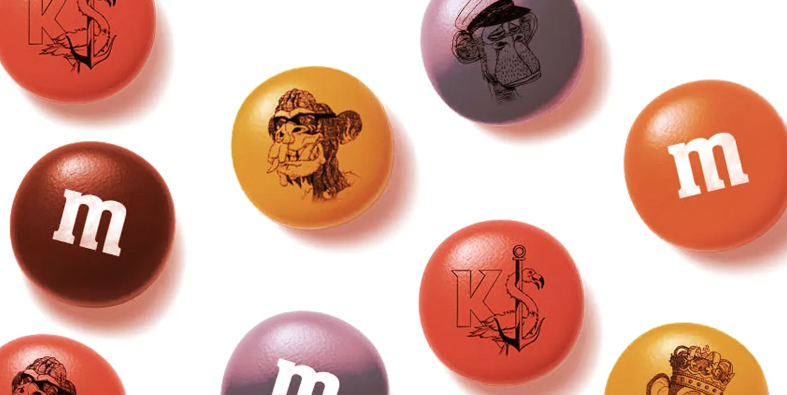 In last week’s press release, Mars confirmed its partnership with Universal to release three NFT-inspired candy bars in a limited run. Since NFT became the town’s talk, hundreds of different people and organizations have been trying to cash in on them. Celebrities, luxury brands, sports teams, and even toilet paper brands getting in on the action. And now, we can add one more interesting brand to the list: M&M. M&M’s is the latest brand to try and cash in on the NFT trend with its limited edition of NFT-inspired candy bars. M&M’s BAYC Inspired Candy According to the press release released on August 24, M&M plans to release candy bars with BAYC (Bored Ape Yacht Club) and MAYC (Mutant Ape Yacht Club), with NFT art printed in every chocolate bar. There’s a planned release of 4,000 limited-edition boxes of candies. The release will be categorized into two specific tiers: The first batch features 3,900 brown celebratory bars The second one consists of 100 premium gold bars wrapped in white and gold foil. Inspired by NFTs and their way of cataloging individual pieces, the premium bars will be individually numbered from 1 to 100. And that’s not all; Mars will also produce 6,000 gift jars and key cards, which they’ll use to promote their project among the member of the NFT community online. The president of Mars Wrigley Global, Jane Hwang, said in the press release that the company is trying to meet its consumers’ needs by innovating how they interact with its brand. Other BAYC Team-Ups Bored Ape is still one of the handful of NFT projects that became a household name. They’ve been able to do this by teaming up with other well-known brands, such as Adidas, Rolling Stone, Pastel, and The Hundreds. Many other firms are currently working on deals with BAYC to create their own NFT-inspired products. A recent interesting collaborator of BYAC is Happy Dad, one of the leading hard seltzer brands in the United States. The California-based company has launched a limited edition of 10,000 banana-flavored hard-seltzers, with each can featuring an NFT-inspired BAYC banana sticker. The move is meant to attract the attention of cryptocurrency enthusiasts and younger generations, driving the demand for seltzers. Happy Dad has maintained a good Internet following, with more than 950,000 people following the brand on Instagram. Source: NFTNewsToday.com #NFT