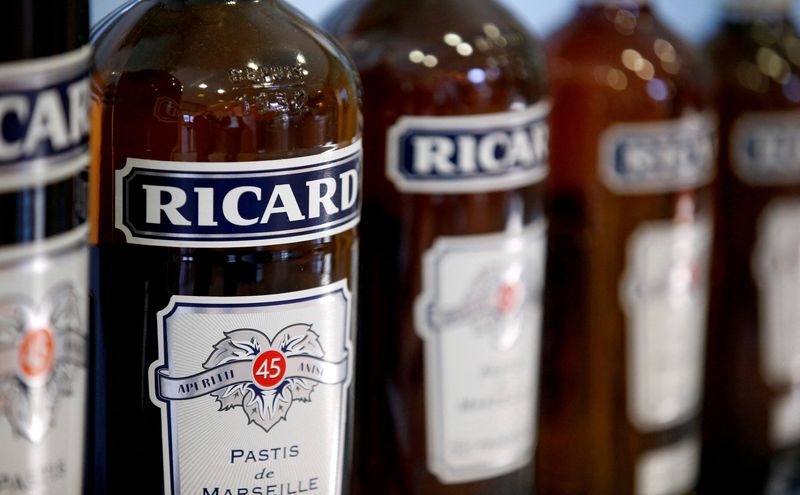 By Dominique Vidalon PARIS (Reuters) -Pernod Ricard reported forecast-beating annual results on Thursday, helped by price increases as the French spirits group benefited, like its rival Diageo (LON:DGE), from drinkers trading up to more expensive spirits. The owner of Mumm champagne, Absolut vodka and Martell cognac said that, while the environment remained volatile with high inflation, the war in Ukraine and COVID lockdowns in China, its sales growth would remain "dynamic" and "broad-based", with a good start to the first quarter that began in July. Pernod Ricard (EPA:PERP) shares were off 0.5% at 182.60 euros. Brokerage Jefferies said in a note that the message on the first quarter was reassuring, but noted there was no specific profit guidance for fiscal year 2023. "The summer months were good across markets," Chairman and CEO Alexandre Ricard told Reuters by telephone, adding he was confident on Pernod Ricard's ability to achieve further price increases this fiscal year. In China alone, where sales slowed in the fourth quarter due to COVID lockdowns from March, trends had clearly improved since restrictions eased in June, he said. The world's second-biggest spirits group said that, with recurring free cash flow at a record 1.926 billion euros ($1.93 billion), it was offering shareholders a 32% dividend hike to 4.12 euros per share and a new share buyback scheme worth 500 million to 750 million euros for fiscal year 2022/23. Over the 12 months to June 30, the firm's profit from recurring operations reached 3.024 billion euros, an organic rise of 19%, above analysts' forecast for an 18.1% rise. Sales reached 10.701 billion euros, an organic rise of 17%, with sales up 8% in the key U.S. market, 5% in China and 26% in India. Pernod said it gained market share in most markets and prices increased across markets, averaging mid-single digits and offsetting the impact of cost inflation. Sales were boosted by resilient consumption among people staying at home, the reopening of bars and restaurants, and a rapid recovery in travel-related retail, it said. Profit at the global travel retail business was expected to return to pre-COVID levls in fiscal year 2022/23. Finance Chief Helene de Tissot told analysts that, in the face of high inflation, the group's ambition was to protect gross margin this year through further price increases and operational efficiencies. The group also said that over the financial years from 2023 to 2025 it was confident to deliver on its mid-term goal. Source: Investing.com #PernodRicard