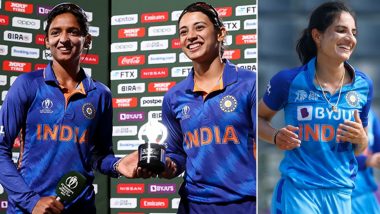 Indian batting stars Smriti Mandhana and Harmanpreet Kaur and pacer Renuka Singh were included in the Women's ODI Team of the Year 2022, announced by the International Cricket Council (ICC) on Tuesday. "The ICC Women's ODI Team of the Year recognizes the 11 superb players who impressed one and all - be it with the bat, the ball, or their all-round exploits in 50-over cricket last year. We take a look at the 11 players that set the highest of standards in women's 50-over cricket in 2022," said a statement from ICC. Source: Latestly.com