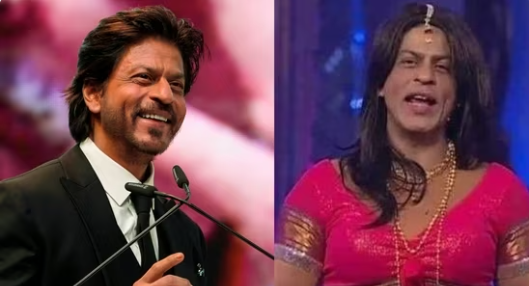 Shah Rukh Khan reacts to Twitter user trying to troll him with old pic: 'I know I am attractive but...'

Shah Rukh Khan responded to a user on Twitter who posted a photo of him dressed as a woman and called him ‘femme fatale’. The actor hosted ‘Ask SRK’ session and replied to many fan questions ahead of Pathaan release. Shah Rukh tweeted, “A big hug to all for making #Pathaan so loved. Those who danced, put up cut outs, bought out halls, all fan clubs, made t shirts, prayed, helped to ease issues & made it a festival. It’s good to be in theatres, feels like home. A quick #AskSRK for fun.” While many fans rushed to drop their questions for the actor, a user tried trolling Shah Rukh and commented on his female avatar from an award show. Replying to a post shared by Yash Raj Films on the micro-blogging site, the troll wrote to Shah Rukh, “Femme fatale” with laughing emojis alongside a photo of the actor, dressed as a woman. Responding to the user, Shah Rukh wrote back, “Arre no no this is me dressed as a lady. I know I am attractive in all avatars, but u will have to find yourself a better muse my friend!! Apologies for misleading you.” Source - Hindustan Times