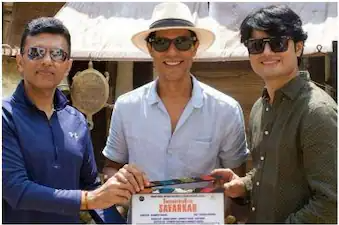 Randeep Hooda to mark his directorial debut with THIS movie

New Delhi: Bollywood actor Randeep Hooda is all set to mark his directorial debut with the upcoming biopic film `Swatantrya Veer Savarkar`. Here is the post shared by the actor: In the picture, Randeep could be seen standing along with producers Anand Pandit and Sandeep Singh, holding a clapboard in their hand. The film is a biopic of freedom fighter Vinayak Damodar Savarkar, popularly known as Veer Savarkar. He was a freedom fighter, politician, lawyer, and writer. Along with this he also has `Unfair and Lovely` with Illeana D`cruz and a web series `Inspector Avinash` opposite Urvashi Rautela in his kitty. Source: ZeeNews #RandeepHooda