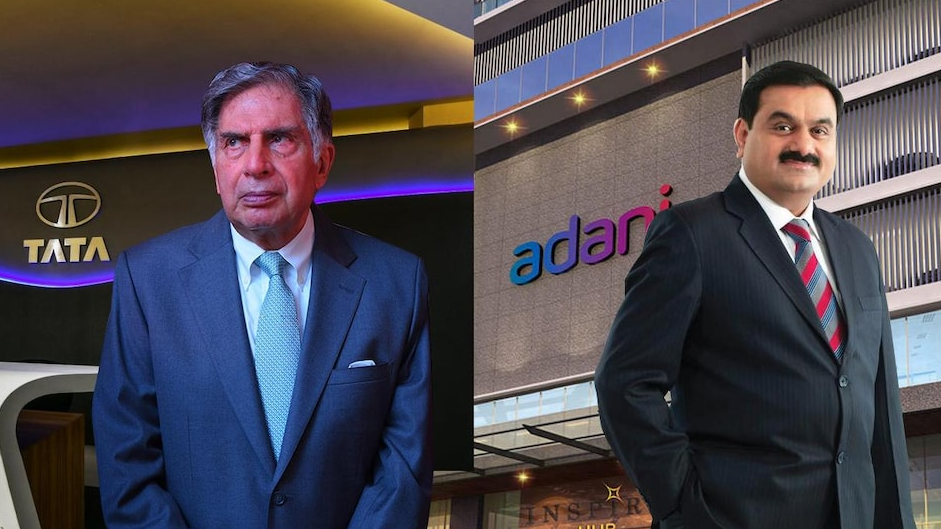 The Adani Group has surpassed Tata Group in terms of market capitalisation race in today's trade.The combined market cap of the Gautam Adani-led Adani Group firms rose to Rs 21.14 lakh crore against the Rs 21.04 lakh crore market cap of the Tata Group, according to data from Eden Capital advisors. The Adani Group clocked a gain of Rs 9,052 crore in market cap compared to a loss of Rs 33,763 crore market cap for the Ratan Tata-led Tata Group. Considering today's market cap, the Adani Group has gained Rs 12.70 lakh crore or 150 per cent from the 52-week low level mcap of the seven group firms. However, the Adani Group has lost 8.2 per cent or Rs 1.88 lakh crore in market cap from the 52-week high level. The Mukesh Ambani-led Reliance Industries Group came in at the third slot with a market cap of Rs 17.49 lakh crore in the list compiled by Eden Capital. Of this, Reliance Industries (the largest Indian firm by market cap) alone contributed Rs 17 lakh crore to the group's market cap. In terms of US dollars, mcap of the Adani Group stood at 264.9 billion, way ahead of Tatas ($263.6 bn) and RIL Group's ($219.1 bn). According to the Forbes billionaires list, Gautan Adani & family were the third richest in the world with a combined net worth of $155.1 billion, a rise of $4.8 billion today. On the other hand, net worth of Mukesh Ambani, the chairman of Reliance Industries stood at $91.9 billion, clocking a fall of $2.9 bn at 12:22 pm today. Ambani is at the eighth slot on the billionaires index. Source: BusinessToday #AdaniGroup