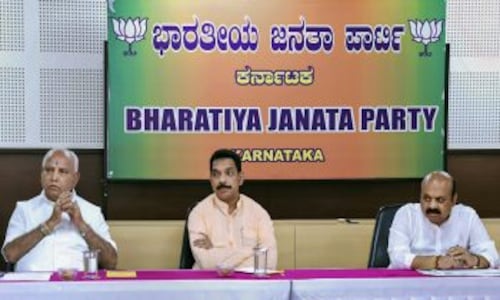 In a major show of strength, the Bharatiya Janata Party in Karnataka on Saturday organised the 'Jana Spandana' programme celebrating three years of the party's rule in the state, at Doddaballapura in Bengaluru Rural district. The event, named 'Jana Spandana' (public response), in this bustling town is also an occasion to mark Chief Minister Basavaraj Bommai's one year in office. According to Bommai, two lakh people from various parts of the state are participating in this event. Union Minister for Woman and Child Welfare Smriti Irani is also participating in this event, he said. The celebration was supposed to be held on July 28 when Bommai completed one year as Chief Minister. However, due to the murder of Bharatiya Janata Yuva Morcha leader Praveen Nettar in Dakshina Kannada district on July 26, the government decided not to postpone the celebrations. The day Nettar was hacked to death allegedly by a group of Muslim youth happened to be the third anniversary of the BJP government in Karnataka. The incident triggered massive outrage from BJP workers and various right-wing organisations compelling the government to defer the celebrations. Besides Chief Minister Bommai, BJP strongman B S Yediyurappa, party's state president Nalin Kumar Kateel, ministers in the government including Health Minister K Sudhakar, who is an MLA from Chikkaballapura, are among the prominent people attending the event. A party worker said 5,000 buses have been arranged to ferry the party workers, supporters and well-wishers. Large number of people thronged the venue. #anniversary #karnataka Source:- CNBCTV18