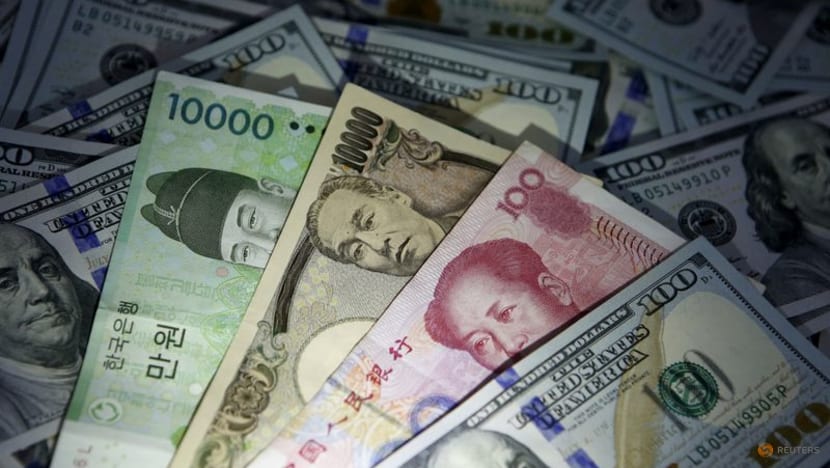 Bearish bets on several Asian currencies hit a record high, driven by a slump in the Chinese yuan and a towering dollar as investors brace for more Federal Reserve rate hikes, a Reuters Poll found. Short positions on the Chinese yuan, the South Korean won, the Singaporean dollar and the Taiwanese dollar all hit their highest levels on record, the fortnightly survey of 12 respondents showed. The greenback's surge has been relentless, with the dollar index — which measures the currency against six major peers — surging nearly 15 per cent this year and hovering near a 20-year high. The dollar is likely to strengthen further as U.S. interest rates are set to rise amid a stronger economic performance, and as investors turn to the safe-haven currency when geopolitical risks surface, such as the energy crisis in Europe. Meanwhile, a slowing economy and a resurgence in COVID-19 infections across China have pressured the yuan, compounding misery on Asia's emerging currencies reeling from widening interest rate differentials and high inflation. The People's Bank of China (PBOC) has rolled out fresh policy measures aimed at stabilising the yuan's rapid fall, including cutting the amount of foreign exchange reserves that financial institutions must hold to 6 per cent from 8 per cent. "The PBOC cannot draw a line in the sand to decisively stem CNY pressures while a vehemently bullish USD (dollar) wave overwhelms," said Vishnu Varathan, head of economics and strategy at Mizuho Bank in Singapore. However, the yuan is arguably better placed to contain excessive volatility compared to other emerging market currencies, he added. The ringgit recently touched its lowest since 1998, while the won is near levels not seen in over a decade. The Indian rupee and nd Philippine peso both recently slipped to their lowest-ever levels against the dollar. Short bets on the Indonesian rupiah, one of the better performing currencies in the region this year, were at their highest since late-July after the country raised subsidised fuel prices by about 30 per cent in an effort to rein in ballooning subsidies. Source: CNA