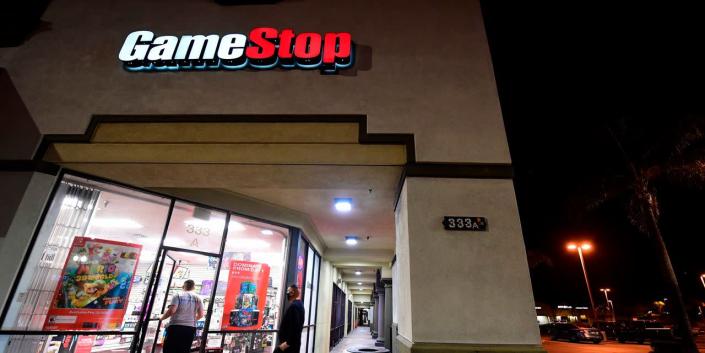 GameStop Corp. stock rallied nearly 12% in the extended session Wednesday after the videogame retailer reported a narrower-than-expected quarterly loss and announced a partnership with cryptocurrency exchange FTX. GameStop GME, -4.38% said it lost $109 million, or 36 cents a share, in the second quarter, compared with a loss of $62 million, or 21 cents a share, in the year-ago quarter. Adjusted for one-time items, the company lost 35 cents a share. Sales fell to $1.136 billion, compared with $1.183 billion a year ago. Analysts polled by FactSet expected the videogame retailer to report an adjusted loss of 42 cents a share on sales of $1.27 billion. That was the company’s sixth consecutive quarterly loss. Despite the gains late Wednesday, investors would have reason to fear trading on Thursday: On the day after the previous 20 quarterly reports, the stock has fallen 14 times, by an average of 14.6%, according to an earlier MarketWatch analysis of FactSet data. In the six times the stock rose, it gained an average of 4%. GameStop long has been one of the most recognizable names among the so-called “meme stocks,” or those fueled by social media. In a separate press release, GameStop said it has hammered out a partnership with Sam Bankman-Fried’s crypto exchange FTX US, aiming to “introduce more GameStop customers to FTX’s community and its marketplaces for digital assets.” The two will collaborate in “new e-commerce and online marketing initiatives,” GameStop said, without elaborating. GameStop will also begin carrying FTX gift cards in some stores, and it will be FTX’s “preferred retail partner” in the U.S. Financial terms were not disclosed. GameStop said it ended the quarter with cash and equivalents of $908.9 million and no debt other than a low-interest loan related to the French government’s response to the pandemic. GameStop shares have lost 34% so far this year, which compares with losses of around 16% for the S&P 500 SPX, +1.83% in the same timespan. Source: Marketwatch #GameStop