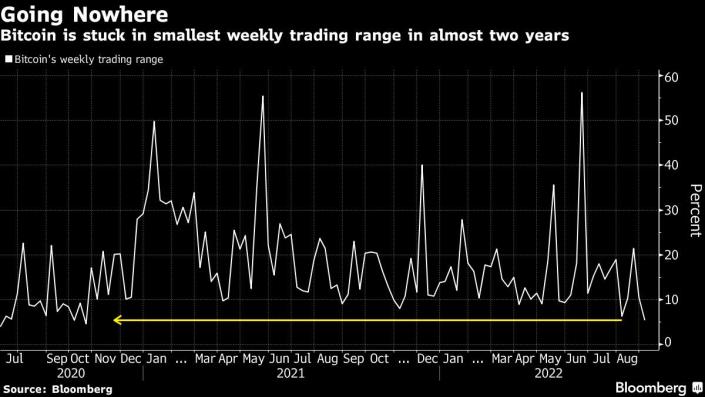 (Bloomberg) -- The cryptocurrency market appears by some measures to be poised to break out of the narrowest trading range in almost two years. Based on one gauge, the leverage ratios for the two largest tokens by market value -- Bitcoin and Ether -- are at the highest on record even with prices of both down more than 50% this year. That is calculated by taking the amount of open interest for perpetual swap contracts and dividing that by the amount of coins held in reserve on exchanges, according to blockchain data-site CryptoQuant. “Folks think the market has stabilized and are willing to make bigger speculative positions,” said Darius Sit, co-founder of Singapore-based crypto investment fund QCP Capital, who pointed out that traders who see a so-called tail risk -- or the chance of a loss happening due to a rare event -- are “getting priced out.” Crypto traders tend to favor perpetual contracts -- which, unlike traditional calendar futures, don’t expire -- in part, because it allows them to keep highly leveraged positions in place. Bitcoin, which accounts for about 40% of the estimated market value of all cryptocurrencies, traded last week within a range of about 5.4%, the narrowest since October 2020, data compiled by Bloomberg show. The lull two years ago was followed by a months-long surge in prices that eventually pushed Bitcoin to a then-record high in April 2021. Cryptocurrencies have stagnated since June, when prices tumbled in the aftermath of the collapse of the Terra stablecoin ecosystem, the demise of hedge fund Three Arrows Capital and the bankruptcies of Voyager Digital and Celsius Network. Source: Bloomberg #Crypto