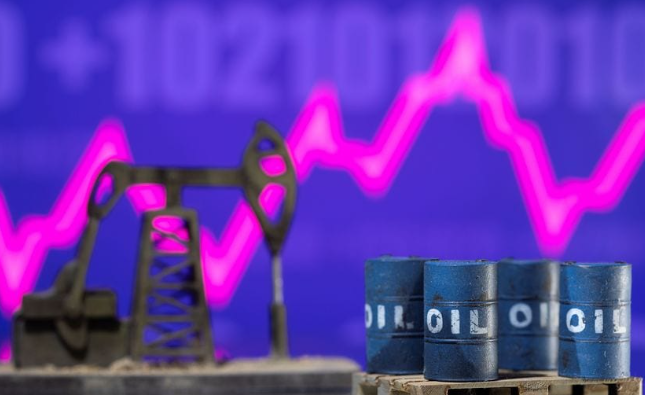 Oil prices rose about 4 per cent on Monday, extending gains as OPEC+ members agreed to a small production cut to bolster prices. Brent crude futures for November delivery rose $3.53 to $96.55 a barrel, up 3.8 per cent. US West Texas Intermediate crude was up $3.08, or 3.6 per cent, at $89.98 after a 0.3% gain in the previous session. US markets are closed for a public holiday on Monday. The Organization of the Petroleum Exporting Countries (OPEC) and its allies, a group known as OPEC+, will reduce output for October by 100,000 barrels per day (bpd), amounting to only 0.1 per cent of global demand, and also agreed they could meet any time to adjust production before the next scheduled meeting on October 5. "It's the symbolic message the group wants to send to the markets more so than anything," said Oanda analyst Craig Erlam, adding that the 100,000 bpd raise last month by OPEC+ was not seen as a big deal. "What we've probably seen from the markets was pricing in most of the worst-case scenario," Erlam added. Top OPEC producer Saudi Arabia last month flagged the possibility of output cuts to address what it sees as exaggerated oil price declines. Russia, the world's second-largest oil producer and a key OPEC+ member, does not support a production cut at this time and OPEC+ is likely to decide to keep output steady, the Wall Street Journal reported on Sunday, citing unnamed sources. "The bigger picture is that OPEC+ is producing well below its output target and this looks unlikely to change given that Angola and Nigeria, in particular, appear unable to return to pre-pandemic levels of production," Caroline Bain, chief commodities economist at Capital Economics, said. Oil prices have fallen in the past three months from multi-year highs hit in March, pressured by concerns that interest rate increases and COVID-19 curbs in parts of China could slow global economic growth and dent oil demand. Lockdown measures in China's southern technology hub of Shenzhen eased on Monday as new infections showed signs of stabilizing though the city remains on high vigilance. Source: NDTV