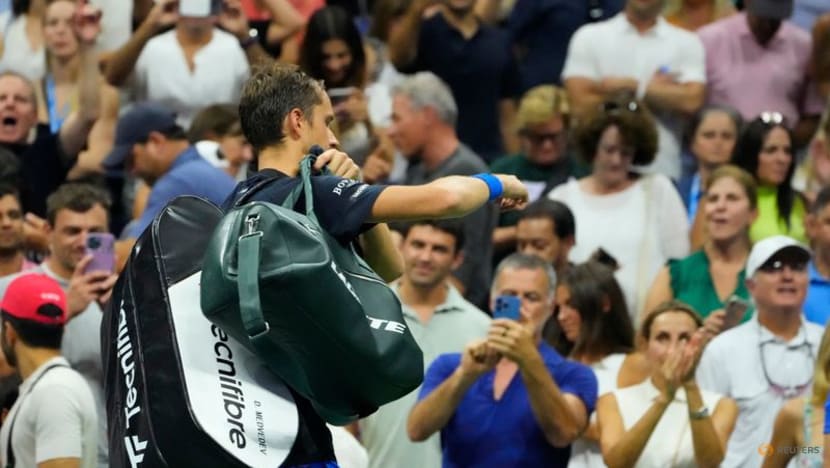 NEW YORK : Russian Daniil Medvedev said Nick Kyrgios played to the level of Rafa Nadal and Novak Djokovic on Sunday, as the Australian shut down his title defence 7-6(11) 3-6 6-3 6-2 in the fourth round of the U.S. Open. The nimble, hard-serving Medvedev hung in with the Wimbledon finalist until the third set, where he lost all momentum and will now lose his world number one ranking in his worst showing at the New York hard court major since 2018. But if he was shamed by the outing in front of a packed crowd at Arthur Ashe Stadium, Medvedev hardly showed it, comparing Kyrgios to his previous U.S. Open finals opponents, 22- and 21-times Grand Slam winners Nadal and Djokovic. "It was a high-level match. Played Novak, Rafa. They all play amazing. Nick today played kind of their level, in my opinion. He has a little bit different game because he's not like a grinder in a way. At the same time he can rally," said Medvedev. "He's tough to play. He has an amazing serve." The 26-year-old reached the Australian Open final this year and made it as far as the semi-finals in the Cincinnati tune-up tournament but there was a major sign of trouble in the run-up to New York, when Kyrgios knocked him out of his Montreal opener. "If he plays like this till end of the tournament, he has all the chances to win it," said Medvedev, who will see his world number one ranking go to Nadal, Spain's Carlos Alcaraz or Norwegian Casper Ruud at the tournament's end. "But he's going to get tough opponents, so it's not sure." And while Kyrgios' form was as cold as ice, Medvedev said another factor may have added to the chill: The American penchant for over-the-top air conditioning. "Today I felt a little bit sick. I mean, the thing is in USA I get sick once time for sure in the swing because the AC is just crazy," he told reporters. Source: CNA