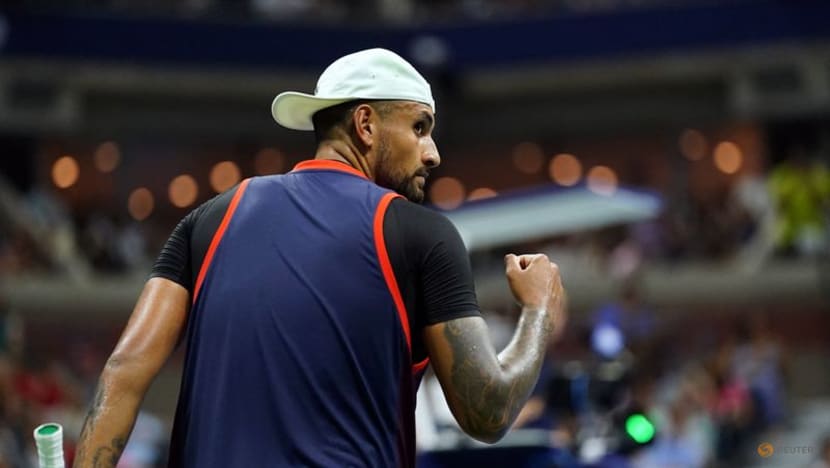 Kyrgios happy to 'look like an idiot' after bizarre play

NEW YORK: Just when tennis fans thought Nick Kyrgios had run out of ways to surprise them, the Australian came up with another bizarre shot during a rally against Daniil Medvedev at the US Open on Sunday (Sep 4). The ever-entertaining Wimbledon finalist elicited cheers from some and quizzical looks from others in the Arthur Ashe Stadium crowd when he ran around the net to volley a mock winner on Medvedev's side of the court. Kyrgios continued his run past his Russian opponent with his forefinger in the air and a big grin on his face, only to be called for a foul point by umpire Eva Asderaki-Moore as Medvedev's ballooned shot had still technically been in play. It cost the Australian a break point but he was able to see the funny side after beating the world number one for the second time in a few weeks and reaching the quarter-finals at Flushing Meadows for the first time. "I still can't believe the boneheaded play I made over here. I thought that was legal to be honest", he said, laughingly, in his on-court interview. "That's going to be everywhere ... so I'm going to look like an idiot. That's alright", he added with a shrug. Other than that one incident, Kyrgios mostly kept to more orthodox shots during the match, with the exception of one attempted under-arm serve that went long. After years of underachieving, Kyrgios has been playing the best tennis of his career over the past couple of months and is now two wins away from a second Grand Slam final in three months. "I'm just trying to work hard every day .... I'm just really happy and hopefully I can keep it going", said the confident 27-year-old. Source: CNA