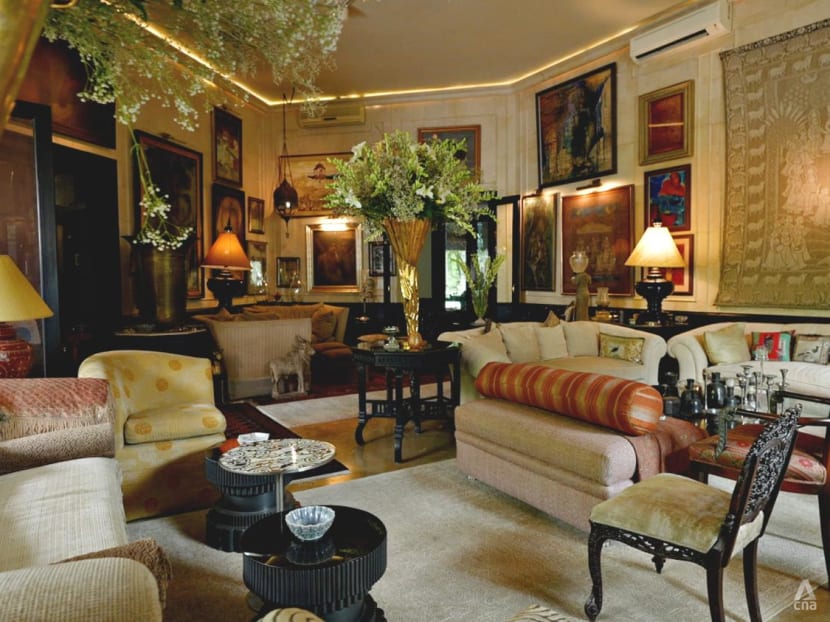 As one of India’s most renowned fashion designers, couturier Tarun Tahiliani’s lavish creations have been worn by glamorous celebrities including actress Priyanka Chopra and Bollywood actress Katrina Kaif. And just like his signature designs, his home in New Delhi, India is a kaleidoscopic reflection of the vast array of his creative influences ranging from antique furniture to interesting art and fascinating decorative pieces that come together to create a feast for the senses. “I think home is what you think of as a womb. You can let go. You sink. You sleep. You regenerate. You share. You laugh. You create your most wonderful memories,” said Tarun. The four-bedroom house sits on a sprawling 7,500 sq ft estate in South Delhi and was built in the 1990s. Tarun’s son, Jahan Tahilian said that his father’s best friend – who is also his godfather - had bought the land in 1997 but his godmother said she did not feel comfortable living in such a secluded area. On the flipside, Tarun found himself drawn to its distance from the city and wanted a home he could retreat to. So, he bought over half the land and built two identical houses for both families. “It is such a therapy, in a city as crazy as Delhi with the traffic, the pollution, the chaos, the heat, to escape into this oasis and to have a piece of land that you could fashion the way you want and design from scratch,” Tarun said. To create a lush garden sanctuary, he hired a landscape designer specialising in indigenous plants to work on the sprawling grounds. Since then, more than 7,500 trees and flowers have been planted, turning the land into a thriving green lung. “I love the idea of having gardens in many rooms; I do not like seasonal planting,” the designer said. “I have all these Indian trees - let them go into flower when they will. Things flower when they are meant to.” There is one tree on the property that is of special significance - a grand Acacia tree on the porch. It was the only Acacia tree on the property when he first bought the land and he gave special instructions to build around it, Tarun recalled. Source: CNA