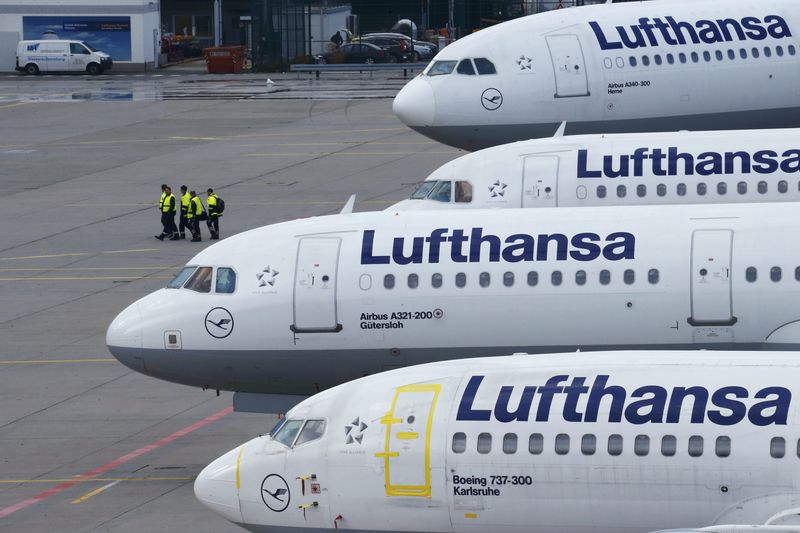 By Scott Kanowsky Investing.com -- Deutsche Lufthansa AG (ETR:LHAG) pilots began a one-day strike on Friday after a failed round of wage talks, forcing the cancellation of hundreds of flights. The carrier has said that it will scrap 800 air journeys to and from hubs in Frankfurt and Munich, warning that the walk-out will have a "massive impact" on its operations. An estimated 130,000 passengers will be affected, Lufthansa added. As of 03:09 ET (07:09 GMT), a total of 607 Lufthansa flights - or 67% of its scheduled departures - had been canceled, according to the travel website FlightAware. Lufthansa has also flagged that the labor action may also lead to individual cancellations on Saturday and Sunday. However, flights operated by Lufthansa subsidiaries Eurowings and Eurowings Discover are still scheduled to operate as normal. Shares in Lufthansa, which fell sharply after the company announced the cancellations on Thursday, traded in the green in the early deals on Friday. Vereinigung Cockpit, the union representing more than 5,000 Lufthansa pilots, first called for the strike earlier this week following the collapse of pay negotiations. VC is demanding a 5.5% pay bump for its pilots, along with ongoing raises above inflation and additional money for sick days, vacation, and training. Lufthansa said these demands would raise the firm's €2.2 billion payroll bill for cockpit personnel by more than 40%, equal to about €900 million, over the next two years. "Even without taking the financial consequences of the COVID crisis into account, this is not acceptable," Lufthansa said in a statement. In response, the airline said it proposed a 900-euro base salary hike over 18 months. Entry-level pilots would also receive more than 18% in extra basic pay over that period, while a captain would be given an additional 5%. The strike comes after Lufthansa faced similar moves from airport workers, including ground crews and security staff, over wage talks earlier this summer. These actions, coupled with labor shortages, forced Lufthansa to cancel flights and added to delays at major airports stemming from a surge in travel following the lifting of COVID restrictions. Source: Investing.com #Lufthansa