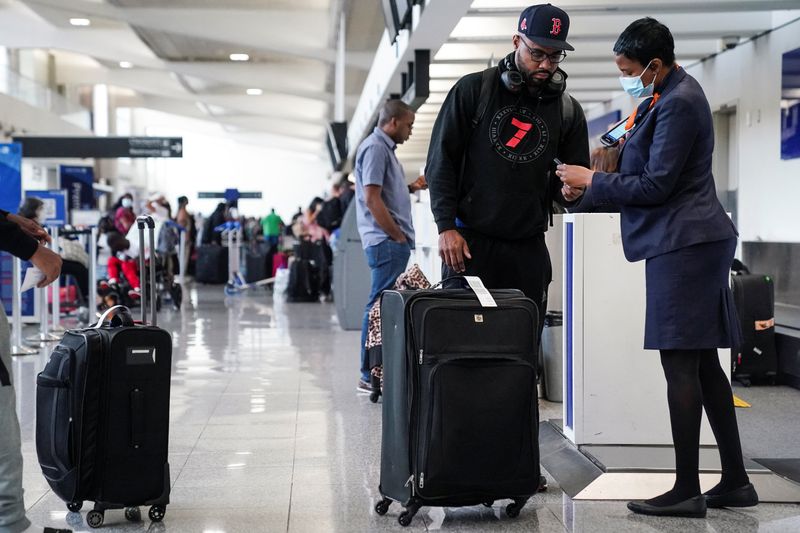 WASHINGTON (Reuters) - The Transportation Department (USDOT) said Thursday the largest U.S. airlines had made "significant changes" to customer service plans with nearly all agreeing to offer passengers meals and overnight stays for delays within their control. Reuters first reported Wednesday many of the changes to the customer service plans that came after Secretary Pete Buttigieg told airlines on Aug. 19 that he would publish a "dashboard" comparing customer protections airlines were committing to offer ahead of the busy U.S. Labor Day travel weekend. USDOT said the changes came after Buttigieg's urging -- and 9 of the 10 largest U.S. airlines made "significant changes to their plans to improve services provided to passengers." The 10 largest carriers account for 96% of domestic flights. Airlines have canceled or delayed tens of thousands of flights this summer as they cut flights and struggled to ramp up staffing as demand returned from historic lows that resulted from the impact of the COVID-19 pandemic. Buttigieg said in the first six months, roughly 24% of U.S. airlines domestic flights were delayed and 3.2% were canceled. American Airlines (NASDAQ:AAL), Delta Air Lines (NYSE:DAL), United Airlines and JetBlue Airways (NASDAQ:JBLU) received checkmarks in all five categories for both delayed and canceled flights for issues within their control. The categories include meal vouchers for three-hour delays, providing hotels and paying for transportation to lodging for stranded passengers and rebooking passengers on the same or another airline. Ultra low cost carrier Allegiant did not receive any checkmarks and did not immediately comment. Both Alaska Airlines and Southwest Airlines (NYSE:LUV) received four checkmarks out of five, while Spirit got three and Frontier two. Airlines downplayed changes arguing they largely already had policies in place -- even if they were not detailed in customer-facing plans. USDOT said airlines incorporating them into those plans makes them enforceable and easy for passengers to access. USDOT said it "will hold airlines accountable if they fail to provide the promised services" and it has not ruled out writing regulations to mandate the customer amenities. USDOT is also writing other customer service regulations. Source: Investing.com #WASHINGTON